On Thursday, September 30th, the Innovation Hub hosted Disruptive Technology Experiment (DTEX) v0.2. This particular DTEX event operated as a test run of both DTEX software and techniques to tackle real-world NATO challenges. The main objective posed in DTEX v0.2 was to evaluate human trust in autonomous systems focusing on a maritime context The event consisted of two separate hour-long rounds with two sets of players.

The Innovation Hub brought together an elite group of collaborators including: the NATO Center for Maritime Research and Experimentation (CMRE) in Italy, Old Dominion University (ODU) Institute for Innovation and Entrepreneurship, and a variety of scientists and military professionals.These collaborators were given a theoretical scenario and were provided potential solutions in the form of technology cards. These solutions were generated through crowdsourcing and then refining the best ideas. These solutions, referred to as Ideas of System cards (IoS), provided future technology that might influence a user’s trust in autonomous systems. 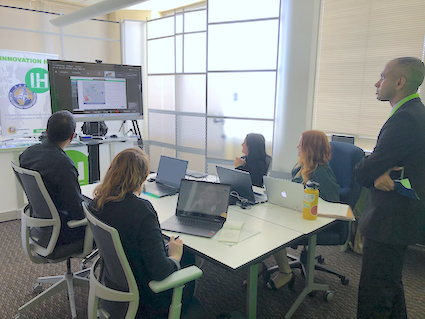 The scenario the participants faced involved an area of the fictional Bogaland Port that was under threat of underwater mines. Their goal was to detect suspicious activity on a partially uncharted sea floor while being mindful of civilian traffic - all while under a time limit. The ultimate question posed to the players was this: “your team is responsible for declaring the harbour safe. Do you trust the autonomous system outputs enough to re-open the harbour?”

With that thought in mind, the players tackled the challenge. They were shown a two-dimensional and three-dimensional simulation of the harbor. The simulation was run three different times. After each simulation, the participants filled out a brief survey about their experience.

In the third simulation, the participants again had the opportunity to pick out three technology cards; however, this time they had access to a wider variety of technologies. They filled out the third survey as the results of the last simulation came in. The event concluded as the group considered the efficiency of all three simulations and filled out the final survey.

Girish Nandakumar, the Chief Architect of DTEX, commented on the day’s event saying, “it went beyond expectations, because we ended up getting constructive feedback from people who understand how this can be improved...it really helped us get feedback from people who are hard to reach, who don't usually have the time, and now they have expressed interest in partnership, so I think that is a great sign.”

The DTEX model is still under development, and DTEX v.02 provided precisely the experience the Innovation Hub needed to increase its effectiveness. There are several more DTEX events coming up, so stay tuned for updates.