With the NATO Innovation Hub’s Innovation Challenge (IChall) best-solutions ceremony rapidly approaching on December 10th, we thought it would be fun to take a look at another previous winner. In this case, Sana Health – one of two winning teams at the Fall 2019 IChall where participants were asked to address Optimizing Leader Development.

Hosted at the Defense Modernization Institute in Budapest, Hungary, Sana Health had both a game-changing solution and a compelling and very personal origin story.

In 1992, Richard Hanbury, Founder and CEO of Sana Health, was forced to crash his jeep off a bridge in Yemen. He was pronounced clinically dead for 8 minutes and then in a coma for 6 weeks. After waking up, he spent the next 14 months in the hospital. 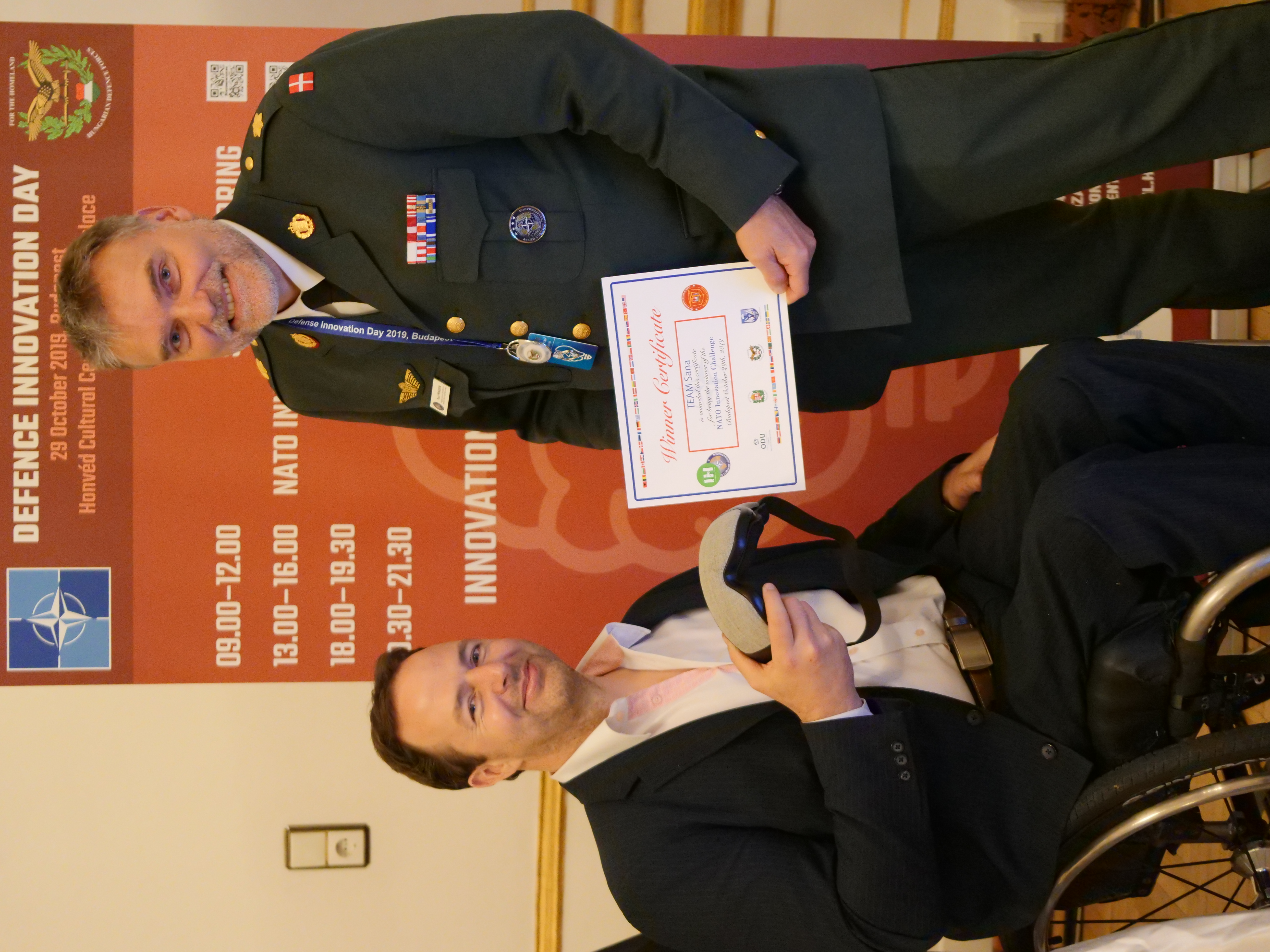 The doctors gave Richard five years to live due to the extreme chronic nerve damage pain. After a lightbulb moment while watching a film in hospital, he began the journey to save his life. To produce the most lasting pain relief, he experimented with the different neuromodulation patterns and bio-metric sensors which normalized how his brain processed pain signals.

The earliest prototype of the Sana headset removed all of his nerve damage pain, and he has been pain-free since 1993. Richard tested his technology with the British Special Air Service, U.S. Air Force, Richard Branson Virgin Challenger flights, and the first Solar Impulse flight around the world – and then in 2016 started Sana Health to graduate that early anecdotal data into large scale clinical trials, as the next step in getting the device into the hands of those who really need it.

As part of this larger engagement and clinical trial effort, Richard was encouraged to enter his prototype headset into the 2019 IChall with just a few days before the entry deadline. The Sana Health team agreed and swiftly drafted their abstract, hopped on a plane to Budapest, and ultimately joined the winners circle with their proposed solution.

What Sana Health shared with the NATO IH and the IChall in Budapest was a breakthrough to help leaders manage a wide range of active stressors – both on and off the battlefield. Their innovative, non-addictive solution was (and remains) a simple mask and headphones that uses audio visual stimulation to increase balance between the left and right side of the brain, leading to greater relaxation – similar to the effect of long-term meditative practices that can lead to improved mental well-being, a clear mind, and an ability to accelerate physical recovery.

Since winning the IChall, Sana Health has raised millions of dollars of venture capital, partnered with the Hungarian military on a pilot program, and conducted trials at Duke University to determine if the mask can relieve the pain of fibromyalgia. They are also working with the Mount Sinai Health System in New York on a broader neuropathy study – and with the FDA on various approvals and certifications.

The Sana Health story is an inspiring one – we hope you will join us on this and future Innovation Challenges to help build a stronger Alliance and more collaborative global innovation community.

Thank you and we look forward to seeing you at the virtual awards ceremony on December 10th!

For more information on the current IChall, please visit us at: