Cyberpsychology can be defined as the study of mental phenomena related to cyber-systems and their context. The term “cyberpsychology”(1) is a neologism which refers to two interwoven concepts: “psychology”, the study of behavior and thought, and “cybernetics”, the science of the laws of control and communication for mechanisms and machines operations. While it is common to speak of the confrontation between AI and natural intelligence (NI), or of transcending NI with an AI that can be misunderstood as something frightening, which might cause disturbances or even threaten our individual and collective liberties, many scientists have been developing a reflection under the term “cyberpsychology”. The advent of intelligent machines is for some a solution to cope with human problems; for others, it stands as a threat to the future of humanity. Undoubtedly, the cybernetic world keeps transforming humans and it will probably transform them even more in the future.

Intelligent robots are used in factories, hospitals, railway stations or airports. They will soon appear on battlefields. Cyber collaborators invade our homes, offices and living spaces. This is not without consequences on society, on social groups, but also on individuals, as they transform their body and their mind. How do humans adapt to this global change, and how does the cybernetic world adapt to humans who change? These questions lead scientists to take an interest in these joint evolutions, in their mutual effects on thought, intelligence, emotions, personalities, and on the modes of machines design, their use and their transformation. Thus, it is necessary to investigate the relation between humans and cybernetic systems, artificial intelligence, robots.

The evolution of AI involves new words, new concepts, but also new theories that encompass a study of the natural functioning of humans and of the machines they have built and which, today, are fully integrated in their natural environment (anthropotechnical). Tomorrow’s human beings will have to invent a psychology of their relation to machines, but the challenge is to develop also a psychology of machines, artificial intelligent software or hybrid robots. In this context, cyberpsychology is at the crossroads of two main fields: psychology and cybernetics. It is understood as the science of the mechanisms of behavior and thought in humans, and of the psychological laws that apply to the cybernetic space and to cybernetic systems. As an autonomous discipline correlated to its mother disciplines, it has been developing since the end of the 20th century, and it shares their characteristics, their limits and their methods while encompassing other traits which result from their reciprocal relations. Centered on the clarification of the mechanisms of thought and on the conceptions, uses and limits of cybernetic systems, cyberpsychology is a key issue in the vast field of Cognitive Sciences. The relationship between mind (psycho) and cyber (Information technology) should be investigated from different angles. While the scientific field is sometimes inappropriately reduced to a one-sided definition of cyberpsychology, it is crucial not to restrict the field of research to virtual reality or psychotherapy applications. Cyberpsychology raises numerous questions, in particular those regarding the motivations, the needs, the reluctances and the difficulties linked to the use of cyber tools and to their environments. Other issues include the design, the implementation or the control of cyber systems with respect to psychological characteristics and processes. Therefore, cyberpsychology can be connected to different concrete topics, among them health issues, aerospace and transport, global security, military organizations, decision making, education, etc. In fact, in terms of research and application, cyberpsychology includes three distinct categories, and their differences are based on the causality link between the respective elements of each of the psychological and of the cybertechnical worlds, and their variation. These elements are called “variables”. According to the famous English epistemologist Karl Popper(2) , common sense tends to assert that “every event is caused by an event that precedes it”. This spontaneous conviction is central to the “deterministic perspective”, according to which every thing or every fact has a cause. Some scientists go even further and are convinced that each event provokes another event. Thus, everything can be said to have a cause and a consequence. This intellectual position is called “universal determinism.” In science, at least two consequences follow from the above-mentioned theories: one can thus “explain” any thing or any event; and one can also “predict” things or events that will flow from the present or the past. In this deterministic context, a dependent variable is traditionally defined as an element whose variation depends on the variation of another element which remains independent of the form of the causality. We then say that the variations of one cause or produce the variations of another one. We speak then of independent variable (I) and dependent variable (D). The causal link is oriented from I to D (dI ⇒ dD). Conversely, the variations of D are not causal of those of I (dD ⇏ dI), except to define co-variant or correlational variables, in a non-causal relation (dD ⇔ dI) or more exactly, for some scientists, a causal relation that is not yet known or discovered. These three sub-themes could be respectively defined for cyberpsychology as “cybercognitics”, “psycho-cybernetics” and “global cyberpsychology”.

Table 1 : Factorial representation of different domains of Cyber-Psychology depending on the status of technical (cyber) or psychological causality.

The cyber effect on the psychological dimension of humans constitutes the first part of cyberpsychology. In all the areas of research, the experimental conditions determine a statute of independent variable for the technical data, and a statute of dependent variable for the psychological data. This field is literally “psycho-cybernetics”. The effects of these cyber technical dimensions on the mind concern the following points (non-exhaustive list): 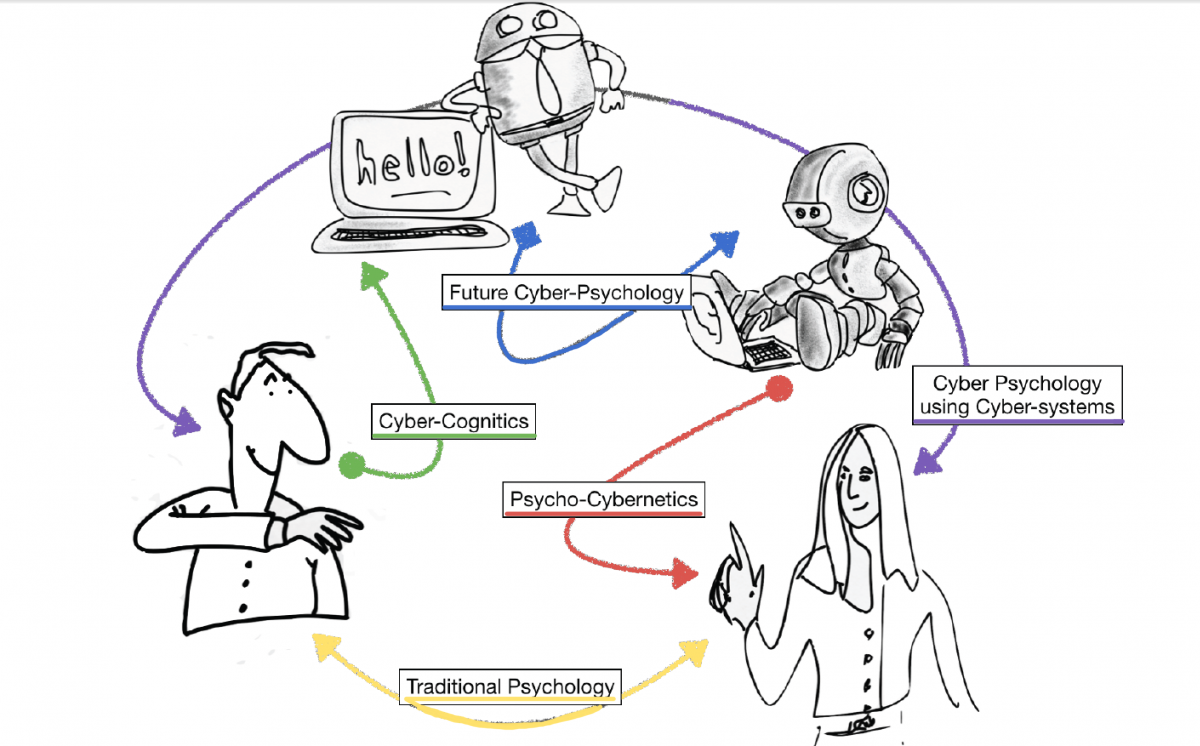 To conclude, cyberpsychology is a developing, complex scientific field which embraces diverse phenomena and different sub-themes. With the advent of smart and autonomous machines, it has become primordial to develop a new form of psychology, one that will examine the way humans and machines impact on each other. In addition, it will explore how the relation between humans and AI will change human interactions and machines intercommunication. It calls for accurate definitions and differentiations so as to leave no ambiguity. Research and applications should therefore take into consideration the type and the specificity of the causal relation that underlies the link between psychology and cybernetics. In terms of research and implementations, it concerns a variety of issues related to Defense and Security and to all the areas which NATO prioritizes to prepare its transformation.